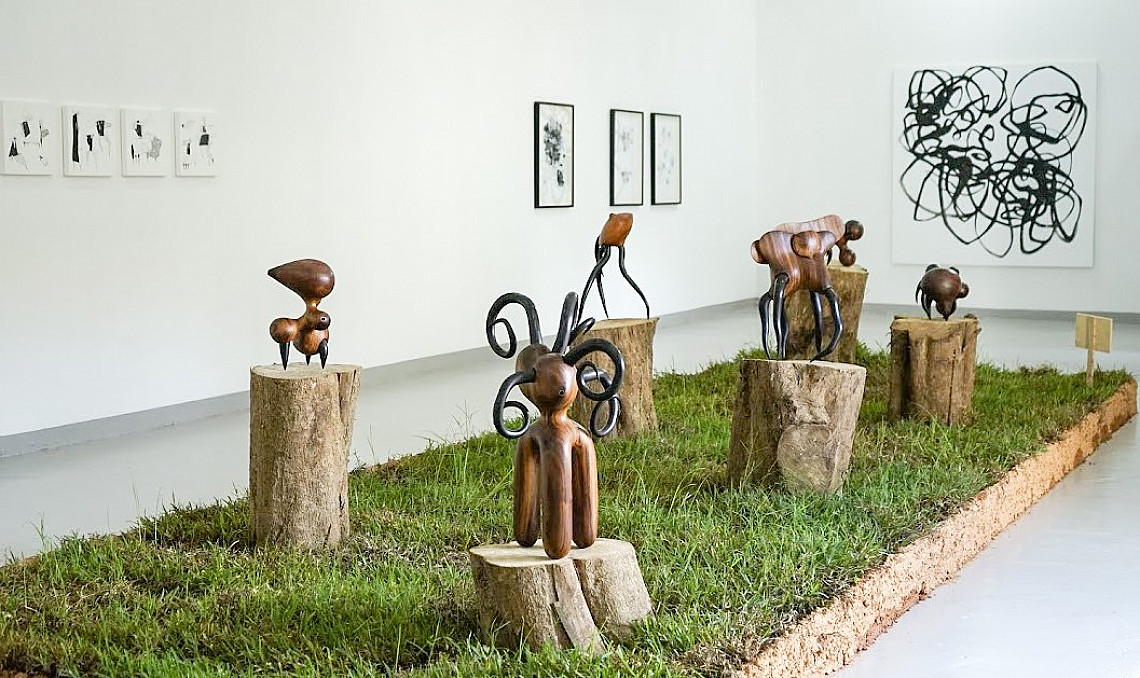 Down in Napak is a solo exhibition by Ugandan artist Wasswa Donald Augustine known as WASWAD.

The exhibition is curated by Michelle Mlati and is on show at Afriart Gallery in Kampala from 14 November 2020 until 8 January 2021.

Waswad’s body of work traverses the worlds of art, architecture and design as a mutation of different life forms. His series of sculptures capture the relationship between the organic and geometric and proposes an evolutionary curve in variable forms of life that are ambiguously animated at the crossroads of the human, nonhuman and more than human.

In this ambiguity his work evokes animal and plant life embedded in the material composition of their life cycle realized by the central grass installation Down in Napak.  Their transformative character is apparent in their ecology moving from the village to the city as raw material to become a new life form. It is a process that not only suggests the urbanization of wood, but its evolution from terrestrial into extra-terrestrial being. Wood offcuts that the artist feeds to the ground slowly degenerate into the soil from being a tree where avocado seedlings begin to emerge where his household had disposed them. The artist foresees transplanting these seedlings elsewhere being mindful of the space an avocado tree will need to grow. This affirms the composition of Waswad’s studio as a space that facilitates continuity between deforestation and reforestation embedded in the ecology of his practice as a regenerative process.

Very large tree trunks that lay on Waswad’s front yard, some of which have been traced to exist since the time of Idi Amin in the 60s further evoke natural and social histories of Uganda frozen in the contemporary moment which the artist hopes to make a new body of work from in the future.

A new body of work composed of a mix of disposed cow and goat leather recycled from different manufactures over a period of 10 years of various shapes and textures incorporates another type of organic matter in his practice. The leather is geometrically composed onto plywood as tiny squares intricately layered tightly next to one another. Like a coding process this ensemble evokes pixels of an organic nature to create a new whole form enhanced by different leather dyes.

The drawings, a consistent feature in his practice, further bring about the strong architectural and design qualities in the making of these other worlds that are not bound in a specific place. Their abstract formation is a concentrated study of negative and positive space as well as exploring different levels of opacity creating a rhythmic balance of diagonal lines whilst some are less rigid and introduce different corners and curves of movement. These create ciphered constellations which the artist seemingly embeds a secret code of forms in constant flux. There is a cosmic intelligence to the drawings, which the artist leaves up to the audience to configure themselves within the architecture and spatiality of the work. These do not necessarily have apparent resonances in our current world. This is where the element of alienation emerges.

The curatorial questions that then emerge is whether alienation can be used as a tool for evolution and adaptation to a new unfamiliar space and situations? And how might we see it as a liberating tool as theoretically launched by the Afrofuturist school of thought. Whilst Afrofuturism has been defined as the intersection of the imagination, technology the future and liberation by Ytasha Womack as well as ‘a cultural aesthetic, philosophy of science and philosophy of history that explores the developing of African diaspora culture’, the exhibition engages what kind of future presents are we creating in our physical and virtual spaces whether real or fiction, to help us evolve grounded in an African context for the Africans that were not abducted by slavery but those that have been subjected to colonial occupation and neocolonialism as context. Waswad’s world of manimals confronts us with a material evolution to what it means to be a living entity on this earth that encompasses biological, ecological and social processes that help us to sense and speculate transformation to another life.

Napak is a district in Northern Uganda named after Mount Napak. Rather than a literal manifestation of the place, it is an imagined space in the exhibition as a metaphor for a park in the context of ecosystems in our immediate environment. These suggest the blurring of landscapes that occur in the outskirts of the city and those that are seen as urban nature. It is a speculation for further understanding urbanization processes of materials as the artist engages with them whilst the central grass plinth is a collaboration by the curator and artist to introduce new experimental environments where the gallery is a laboratory for adaptation.