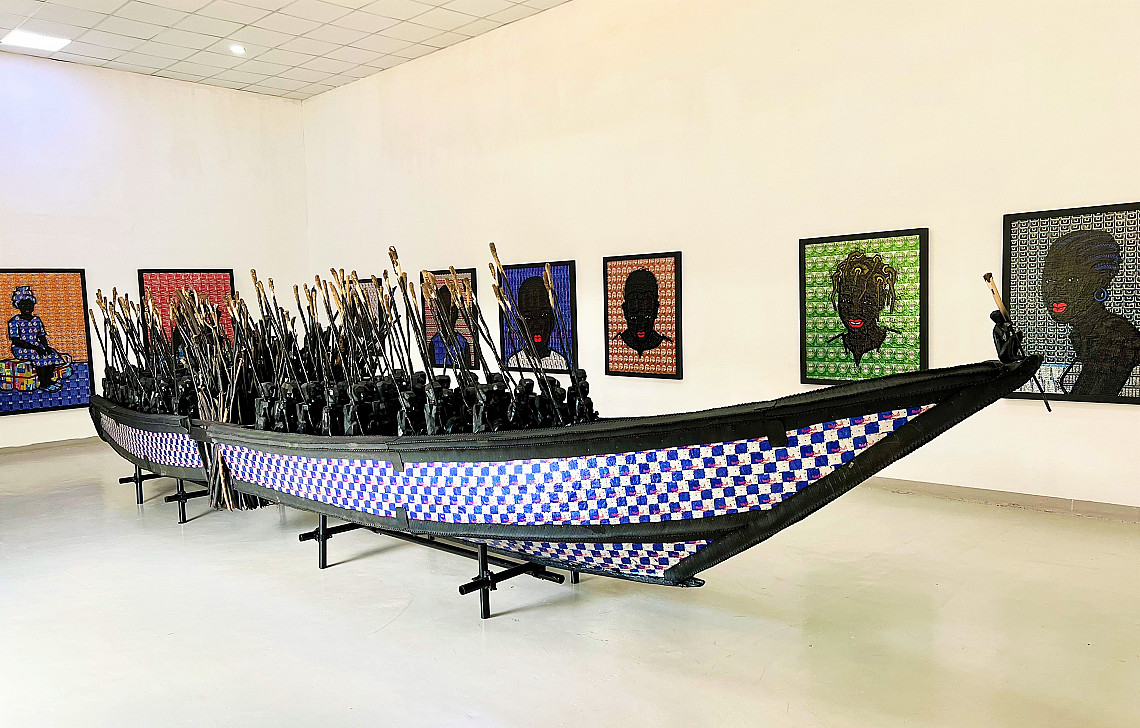 A solo exhibition by Xenson.

The term Kaddugalamukatale is made up of three Luganda words: ‘Kaddugala mu katale’, which literally translates into ‘the Black person in the (physical) marketplace’, or in a more abstract sense ‘the Black person’s place in economy’. However, when looking closer into the etymology of ‘kaddugala’, one notices two familiar terms: ‘kaddu’, meaning ‘one small slave’, and the verb ‘okudugala’, meaning ‘to be dirty’. Despite not linguistically confirmed, if taken into consideration, the term denotes the tone of your skin to be a signifier of how likely you can become a commodity. At the same time its use today is to rather hint at a hyper-positive message around Blackness.

The ambiguous title of this exhibition indicates Xenson’s engagement with multiple perspectives, the open-endedness of his artistry, and his passion to navigate a variety of concepts, and to reflect the complexity of contemporary culture. In this exhibition, the artist dives into the intersections between the Black person being buyer, salesperson and commodity at different times in history and in the present; the questions of who is buying, who or what is the commodity, and who is offering, lead into explorations of trade, consumerism, power imbalances in the global market, and Blackness – with a focus on Uganda within its global ties.

Upon entering the room, the viewer is confronted with the beauty of the everyday – the beauty found in the simplicity of human expression. The artist presents a celebration and interrogation of the informal social spaces market communities occupy in Uganda, and, most importantly, its people - ‘omuntu wa wansi’. As a keen observer of his environment, the artist breaks down the atmosphere found in market spaces and road-sides to some of its sensory patterns: faces, materials, sounds and ultimately translates them into artworks.

With careful attention to the complexity inherent in life, Xenson creates visual narratives pointing towards patterns, personalities, and the microcosm of market communities in Uganda. Not neglecting the precarious situations such as a high level of crime, financial poverty, and being at the mercy of city officials regarding their physical existence within their space, the artist does not adopt a condescending or romanticizing gaze unto slum life either. Instead, Xenson’s work allows for a multiplicity of perspectives that can exist beyond condescension, romanticism, exoticism and victimization, judgment and arrogance.

The paintings in this exhibition are a development from the installation Nfukirayocanchai commenting on Uganda being listed as the number two country of alcohol abuse globally at the time. The installation at 32 Degrees East/Ugandan Arts Trust was made up of recycled cans which the artist re-used here as backgrounds to his paintings. Beyond the drinking problem, the artist, here, examines consumerism and corruption and how it may seep into every corner of society. In Uganda, ‘drinking’, as in ‘kachai’ and ‘kasoda’, is often colloquially used as a euphemism for corruption. Just like alcohol can eat up an individual, corruption can consume a whole society. Often a trade in favors or a trade in favors for money, corruption might eventually become the consumption of power, and being consumed by power is nothing but a dance with fire.

The centerpiece of this exhibition is the installation Abasika Batute (‘The heirs have been taken’) including a vessel that used to be a fishing boat owned by a fisherman in Ggaba, a neighborhood on the outskirts of Kampala bordering the shore of Lake Victoria. Dwelling on ideas of consumerism, the installation invokes images of maritime trade, slave trade in particular. The Arabs were the first to come to the East African shores to trade, to bribe local leaders with guns and booze, among other goods, for their people, and to establish new trade structures and dependencies stretching across the globe. This piece is also a commentary on the recent phenomenon where fishermen are supposedly arrested and their boats dismantled.

Last but not least, this exhibition extends into a critique of itself in a peculiar way: Blackness in the contemporary art market. It speaks to the current trend and popularity of Black portraiture in the international art market. The Black body, this time on canvas, becomes a commodity once again perpetrating old structures of exoticism while the market arguably is still largely regulated by a majority white “taste”. However, many contemporary African or Black artists who depict Black bodies simply represent their reality, or take on an activist standpoint for the respectful incorporation of Black bodies in the art canon. It has to be noted, that, how this development in contemporary art reflects in the global art market, should not take away from the power of genuine representation.

Xenson’s explorations with different materials – found and recycled objects, organic materials, paint, metal etc. - have allowed his practice to exist beyond the single story. The artist fuses material and subject matter in a way that permits deeper and far-reaching dialogues. Spaces interpenetrate; he creates visual narratives with many chapters and loose ends which the audience can enter from any chapter - from the perspective that is most accessible to the individual viewer.

In his distinctive and conceptual approach to art, the artist is serious, humorous, and witty. On this basis, Kaddugalamukatale is a homage to the Ugandan market dwellers, their creativity and resilience, as much as it is a political show that explores consumerism, and legacies of imperialism and its aftermath found in today’s culture.