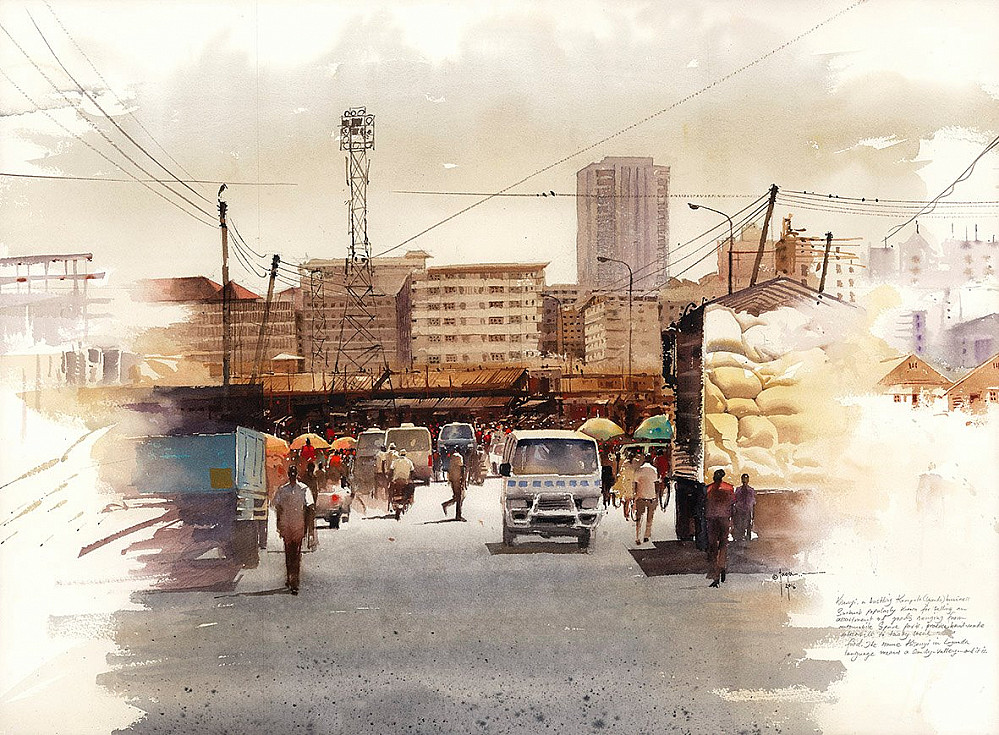 An exhibition of watercolors.

Uganda’s capital city Kampala was once a gazetted area for hunting and the Impala was the dominant animal. This place had many other animals like bush duikers, sitatunga, leopards, civets, and genets. Some of these species still abound but the dominant impala was hunted to extinction in this part of Uganda.

Unless you have an artist’s mind; it is hard to imagine that places like Bank of Uganda, the Parliament or even Kisementi used to be dominated by athletic men wielding spears with nets and dogs chasing after the springing spiral-horned antelope, called the Impala. It is after this animal that Kampala acquired her name.

But before this place was named Kampala or even Buganda, it had another name. It was called Muwawa and the people who live here were not called Baganda but Balasangeye. This part of the story emphasizes the point that Kampala was truly a hunting area with a variety of species ranging from lions to rhinos we now sought out for in highly protected areas because when the game shifted from the traditional hunt to feed to modern hunt to profit and pleasure, the animals were almost wiped out.

Today, we have our cherished Kampala city and the changes still occur but sometimes they pass unnoticed. The major changes in the landscape are structural and as we embrace these changes, I bring you certain locations I am almost sure will vanish in the coming five to ten years. This collection of watercolor paintings include our vegetable markets, streets and a memorabilia of buildings that might be demolished as the steel beams shoot our city in the sky.

As artists, part of our calling is to create records of what we experience and appreciate and it would be a disservice if I lived in Kampala and never documented it using color on paper with a brush.

Taga is a master in watercolor, regarded by many as one of the most difficult media to manage because it involves working with a wet surface and colors are always moving, creating an element of surprise. At the same time, the extreme portability of the medium makes it useful for quick sketches wherever the artist might find himself. Taga’s energetic, abbreviated brushstrokes and phenomenal sense for detail and color make his works true collectors’ items.

Taga Francis Nuwagaba has a BA in Fine Arts from Makerere University. After completing his degree in 1990, Taga embarked on his career and has painted since using watercolor and oil. His favorite subject has always been wildlife, scenery, and the human figure.