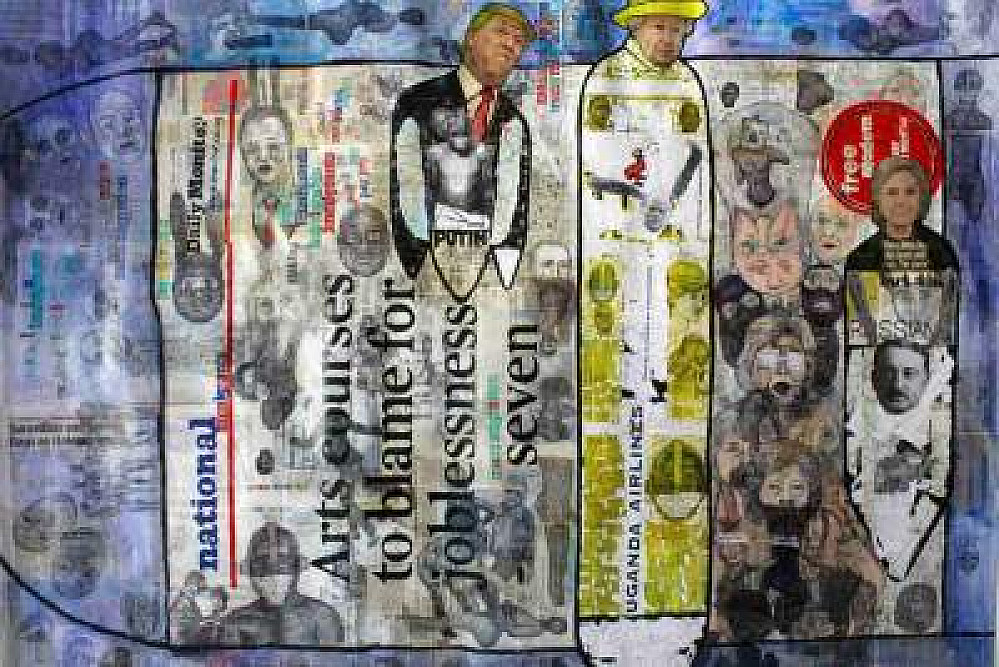 Shadows are the things that stay with us and contextualize the appetite of the present in us. We are afraid of our shadows. ‘Black’ people live in the shadows of ‘white’ people and accept their position as living shadows for whiteness. Whiteness symbolizes power in this age and for people like Blavatsky, in ages to come too.

We live in shadows of appetite as slaves of the things and places to which we would like to go to or do. Places to go and things to do are more attractive because there are people everywhere with vested interests in stopping others from going somewhere or doing something. Appetites that are unfulfilled can become traumatic, present mental shadows. Appetites become toxic when in light of their projections on the people around us, we feel that it has abandoned us to continually want what we do not have in terms of material possessions or positions of privilege. My living in shadows of white constructions of power has a libidinous aspect in the way that Fanon and others perceived a sexual tension between oppressors and the oppressed. Oppressed or dispossessed people project their appetites onto the very things that maintain their status of oppression like ‘fake independence’ or false drives to decolonize politically while ignoring virtually all the legal and structural infrastructures of capital such as colonial laws, bigwigs, and worst of all borders. The desire to become white is our principle fixation in our time. It drives our appetites not only to be white but also to consume white pleasures and adopt white appetites.

White people continually deal with the fright that black figures give them, and as exemplified in the case of rising white nationalism in the so-called Developed world. The realization that these ‘black’ figures are blank figures created by their own desire to get rid of their fear of the quintessential athletic and desirable hypersexual black slave.

My work comments on aspects of historical points of interest that give rise to mistaken nationalisms such as that driving racism in the world for instance in the guise of ‘making America great (white) again’ or ‘building a wall’ as if the invented whites in America did not find human inhabitants on the lands they so jealously protect from ‘illegal immigrants’.

I also comment on how our insatiable appetites have made us collect all sorts of stuff in our world and become addicted to all sorts of things and behavioral patterns that try to keep us stimulated and distracted all the time. The increasingly neurotic use of media has left us in a trance of distraction so we are continually fed on our desires for becoming white while further enslaved by appetites of those addicted to their own inferiority, absence, and invisibility.

My work also bears my dislike for some regions of Africa pretending to speak for all Africa as if we are homogenous as well as my recognition that many times we are co-creators of our own exclusion by giving in to our fears of not being accepted, settling for mimicking/ outright copying of what other artists in other parts of the world are doing instead of carving our own specific or even indigenous ways of making visual work.

I also try to talk about how we can resist internalized inferiority complex through focusing our focus on imagery that targets people who either represent white power or openly project a support for the status of white supremacy project.

My current work tries to capture some of my critical thoughts about where I think I find myself positioned within the mass media distraction of matrices. and how I still feel lost in the maze of addiction, desire, and insatiable appetites. I use artistic metaphors to project my thoughts on appetites, addiction to technology, the trance of distraction and the impotence that one feels in light of seemingly insurmountable identity crises and the unsustainable internal African borders which should have collapsed if real independence had arrived at us. The days of self-sustainability may already be behind us as globalism has taken over, yet the sense that a continual repudiation of the markers of global economic classicism is needed that have been caught up and essentialized in the skin color maze.  I also realize that not all our oppressors should necessarily to be classified as ‘big others’. In some cases, such as in Uganda, oppression has been occasioned by many ‘little others’. I leave that last comment as an abstraction precisely because I believe that Uganda is and has always been merely an abstraction and a shadow of something more grotesque and incomprehensible. If Uganda, indeed as many other symbols of globalised capital that should be dismantled as it has outlived the possibilities of its existence and as movement of people will show in the next decade or so, Africa’s borders have been closed to Africans for too long, even as they have continued to be open to foreign exploiters. This situation is soon coming to violent crossroads.

I do not see myself as an Afrofuturist as my interests are not about glamorizing the African presence in the world by simply replacing white faces with black faces or making costumes of blackness. Our predicament as black people in a hostile world runs deeper than that. I prefer to have questions for white bodies instead, especially those that represent power and Empire. The fear that Chika Akeke Agulu thinks ‘African’ art is in danger of gentrification is already happening. Through Afrofuturism, young black artists are being co-opted into a future from which resistance or critique of Power can easily be curated and their products to simply become mimicry of black diasporas or what others want us to talk about on the African continent rather than the focus being on the pragmatic present of Art being directed from the interior.