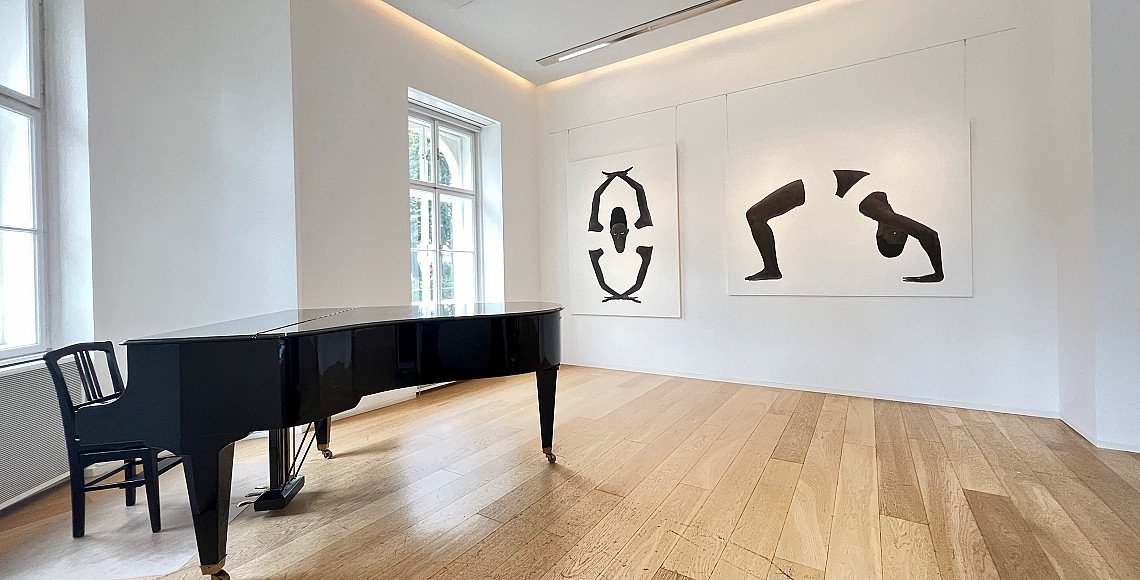 Mlengeya has developed an unmistakable signature style through her paintings, receiving critical acclaim in her still young but profound career as an artist and painter. Her seemingly minimalist paintings depict Black women on a white background, whereas the women’s torsos are left undefined and blank by the artist, just as the white background of her canvas remains untouched. The visible body parts enter into a dialogue with the negative space surrounding them, allowing for their bodies to be not only free of concrete form but also free of definition and judgement while showcasing poses that exude a strong sense of empowerment and intrepidness.

For her Viennese exhibition Don’t Try, Don’t Not Try Mlengeya delved into Taoist and Confucian theories surrounding the Subconscious, Spontaneity and Trust - being particularly interested in whimsical acts in creation and life and how human cognition and thinking are also bodily processes.

While the artist’s choice of materials, her mode of working, her color palette and certain iconographic elements entail a conscious repetitive character, there are many choices left to the spur of the moment. For this exhibition, Mlengeya opened herself up to allowing more of her subconsciousness and an increased sense of spontaneity to lead the process in the creation of her eight artworks.

Capturing the unconscious movement of expressive and improvised dance by a female contemporary dance artist and further selecting instances of these organic movements to be painted on the canvas, Mlengeya allowed for an effortless action to enter her mode of working.

Reacting to a highly orderly world, especially during a pandemic, where rigidity and orderliness have become necessary modes of living, allowing spontaneity and spontaneous movements back into one’s life carries an immensely liberating potential, endlessly multiplied for women, that the young artist draws upon.

As much as Sungi Mlengeya’s new paintings are a contemplation on time, consciousness and spontaneity, the artist’s works simultaneously tell us stories of contemporary African womanhood, empowerment and the potential of freedom through movement. By doing so, Sungi Mlengeya is opening up spaces of embodied imagination and free movement, for the audience to fill in the blanks themselves and for women to reclaim their rightful spaces in a self-determined fashion.

Sungi Mlengeya was born in 1991 in Dar es Salaam, Tanzania. She is a self-taught artist who works primarily in the acrylic medium on canvas creating paintings that are free, minimalist and with a curious use of negative space. Most of the works consist of dark figures in minimal shades of black and browns against perfectly white backgrounds, a commemoration of women who surround her. In 2020, Sungi Mlengeya was honoured in Apollo 40 Under 40 Africa, a selection the most inspirational young people in the African art world.

Prior to her first ever solo exhibition “Don’t Try, Don’t Not Try” at Birgit Lauda Art Foundation Vienna, the artist’s recent inaugural solo exhibition (Un)Choreographed that took off in June 2022 marked the

reopening of the home of London’s Africa Centre in Southwark. In 2021, the artist presented a solo booth at Art Basel Miami Beach titled “Unsettled Minds” following her debut solo exhibition “Just Disruptions” at Afriart Gallery in Kampala earlier that year. Another solo project was a booth at Investec Cape Town Art Fair’s SOLO section in 2020.

The artist was part of A Force to Be Reckoned with by UN Women in 2021, an art exhibit and auction benefiting black women across the world. Other group exhibitions include Black Voices: Friend of My Mind Ross-Sutton Gallery, The Medium is the Message Unit London, Drawn Together Unit London, 1-54 Highlights Christie’s London 2020, Playing to the Gallery and Surfaces II: Gender Identity Rebellion Afriart Gallery, 1-54 Art Fair 2020 London and New York, and Latitudes Art Fair 2019 in Johannesburg.

The Birgit Lauda Art Foundation (B.LA) has been established with the aim to support artists and to donate its profits to the international nonprofit organisation Women without Borders (WwB), founded by Dr. Edit Schlaffer in 2001. Women without Borders is dedicated to the empowerment of women worldwide.