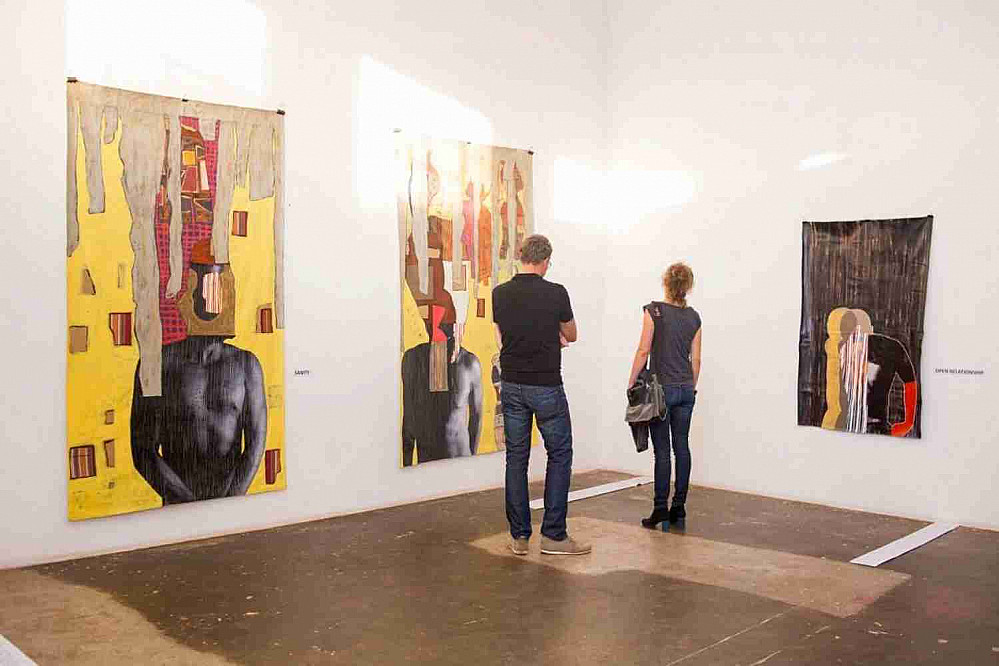 Everyone being different is "what is really beautiful". If we were all the same, it would be boring.

In his recent body of work, artist Collin Sekajugo delves into the subject of identity with a quest to interrogate and explore who he ’s as an individual. It is a subject that has perplexed him for a long time firstly as a multi-ethnic individual of Ugandan and Rwandan decent: his mother was a Rwandese and his father a Muganda from the Southeastern district of Uganda, Masaka, but as a family, they grew up in Kenya. So is he Ugandan, Rwandese or Kenyan? Secondly, through his itinerary as an international artist, traveling to different artists residences and exhibitions across the globe, he has quietly confronted such questions of who he is and where he comes from.  This constant interaction with the subject of personal identity is an inspiration to his present exhibit where the artist through interrogation breaks free from the bondage of singular identity and proliferates the idea of identifying one’s individuality beyond the surface.

The artist deploys his body on canvas as a metaphor for the individual’s disposition, moral values, and interests that need to be explored when seeking one’s identity.  According to the artist such values reside inside and not on the outside.  As such, he deliberately adopts a faceless human figure in the artwork in order to avoid the idea of deception. The face is deceptive, in the sense that, it does not give an objective picture of one’s identity. Unluckily, often times society uses it as a measure to judge someone personality: whether they’re ugly or beautiful, kind or selfish and corrupt or generous. Yet the artist is not only seeking an objective judgment on the subject of identity but is also interested in his audience arriving at varied interpretations of his work. It is assuredly, a gesture of freedom of expression that is heralded by the expressionistic artist.   In this context of objectivity, Sekajugo ’s collage paintings in the exhibit are large to enable the audience to arrive at a diverse understanding of his work.

Working with collage ( synthetic fabrics) not only inspires an interesting visual interaction with his art that the audience relishes each bit of it as it adorns the large space in which it hangs but immediately draws on the idea of familiarity for the viewer. The artist collages Kikoyi and Kitengi fabrics within his work that are familiar material to the local community.  The fabrics are a regular feature on the local fashion scene where men and women appear clad in them from time to time. Nonetheless, the material evokes the notion of a complex identity for both the consumer and producer. The apparel though often localized to the African continent- but also identified to certain cultures of Uganda-was adopted from  Indonesia batik art with origins from Holland.

Further than this concept of localization and familiarity to the medium, is the narrative of recycling that the artist responds to through his paintings.  Sekajugo’s artistic practice is not only limited to working with small patches of synthetic fabrics like Kikoyi but also digitally prints on large tapestries of denim; a fabric that is chiefly used in the production of jeans and other heavy duty clothing; for this exhibit.  The artist has been very consistent with the theme of recycling in his art like in previous shows where he worked with plastics ( jerry-cans), metal debris and Kitengi fabric on Boda- Boda helmets to counter the subject of recycling and environment sustainability that dominate the contemporary art world. But the artist is not only responding to that international call. He is primarily concerned with creating that authentic connection with the local community that he works in. As a community artist, he’s tasked to identify challenges of the community and find solutions to them artistically. As such, as he recycles materials- found objects- in his community, he is constructing a relationship with the public, but also at the same time is exemplary in showing his community how to creatively handle such material to create a figurative narrative on issues that affect them.

The artist’s technique to neatly stitch the denim with other synthetic media thrives on the theme of therapy that does not come as a surprise for an artist who defines himself as an artist with a social conscience. Sekajugo has been involved in initiatives of using art to change lives in the past. In 2006, he established Ivuka Arts Centre in Rwanda, Kigali as a visual arts space that helped ambitious young people to heal and rediscover themselves through the arts. Similarly, in 2017, the artist opened up an arts village in Ndegeya ( Weaver Bird), located in Masaka, to transform the village into an arts center and reconnect with his paternal roots.

Sekajugo ’s recent body of work is as emotive as objective and through his interrogation and exploration, he’s successful in demolishing the stereotypes that society peddles when dealing with personal identity. It is commonplace, that someone’s identity will be measured according to how they look and not how they think, feel and respond to the wider community. In a larger perspective, the artwork is a reference to the inane nature of mankind where he’s quick to judge or arrive at conclusions without seeking facts that are often hidden somewhere else. As such the artist invites conversation on this topic that underlies societal changes and grievances in this contemporary society.

Collin Sekajugo is the founder of Ivuka Arts Rwanda, Kigali and Weaver Bird Arts Centre, Masaka, Uganda. He has participated in numerous international artist residences across the globe and exhibited in major art galleries in Europe, Asia, America, and Africa. His work carries the distinction of being permanently exhibited at the Smithsonian National Museum of African Art in Washington D.C

[i]Invisible Man is a novel by Ralph Ellison published in 1952. It addresses many of social and intellectual issues facing African Americans in the early twentieth century, including black nationalism, the relationship between identity and Marxism and reformist racial policies as well as issues of individuality and personal identity.